Canada versus U.S. nominal GDP since the Great Recession

I was wondering how nominal GDP growth has compared between Canada and the USA since my last post in March 2013?  Here is a short post comparing growth rates.

The trend NGDP growth rate for both countries was approximately 5.1% prior to the recession.  Canada is growing close to the trend rate while the U.S. is growing significantly below trend.

Based on the hypothesis in my March 2013 blog the slower growth is due to monetary policy.  Others argue the lower spending growth is due to secular stagnation driven by lower population and productivity growth rates.

Spending matters for governments because nominal spending is required to pay-off bonds which are nominal in nature. The same can be said for corporate debt.  With lower spending growth, it will be harder to pay off debt.

Canada versus U.S. NGDP Growth Since the Great Recession

From 2000 to 2006, Canada and US NGDP growth averaged around 5.1%.  Assuming this growth rate in nominal spending qualifies as a neutral monetary policy, monetary policy has been too tight in the US since the financial crisis, and in Canada since the beginning of 2012. 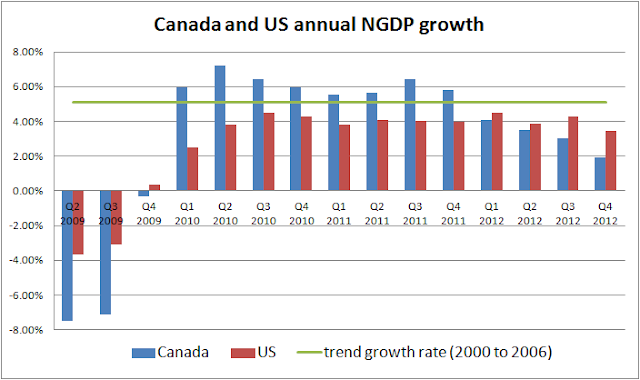 Posted by Bernhard Eichenlaub at 04:44 No comments:

The secular decline in interest rates


Yields on ten year US Treasuries peaked in July 1981 at over 15%, as the graph below shows; while today, yields are just above 2%. Yields for shorter maturity T-bills, Canadian government bonds, and real interest rates (reflecting inflation expectations) follow a similar decline.  The decline in interest rates, both nominal and real, has been a word wide secular phenomena. What explains the decline in interest rates since 1981?  And importantly for asset valuations as well as financial market returns, where are interest rates headed? In this post, I explore some perspectives that attempt to address these questions. An explanation for the decline in interest rates is the global savings glut hypothesis made popular by Ben Bernanke in 2005 (here).  Mr. Bernanke states:


To be more specific, I will argue that over the past decade a combination of diverse forces has created a significant increase in the global supply of saving--a global saving glut--which helps to explain both the increase in the U.S. current account deficit and the relatively low level of long-term real interest rates in the world today. The prospect of dramatic increases in the ratio of retirees to workers in a number of major industrial economies is one important reason for the high level of global saving.

Bernanke claims that the high world savings rate, caused partially by the increase in the ratio of retirees to workers, helps explain both the current account deficit in the United States as well as low interest rates. The problem with this view is that since the late 1970s, the savings rate for the world as a whole has declined slightly. Hardly a savings glut. 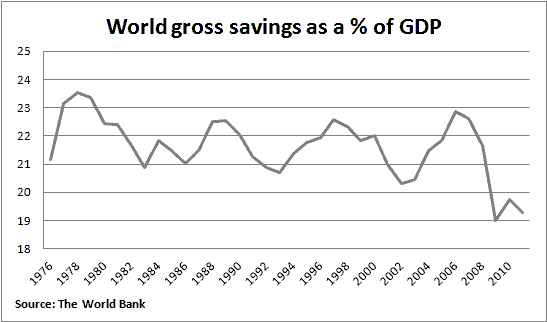 Robert Barro, in an NBER Working Paper (here), summarizes the determinants of the rate of interest as follows:

The rate of interest, or the price of credit, is determined by the intersection of the supply of desired savings and desired investment, shown in the diagram below. The decrease in interest rates since 1981 could therefore be explained by reduced investment demand, as well as an increases in savings. 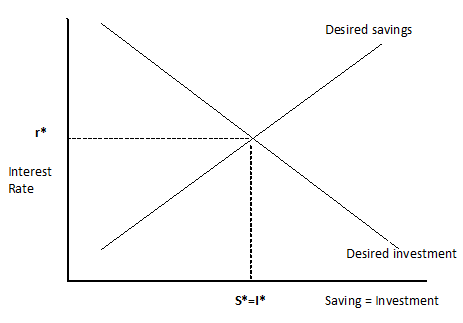 
Savings is not the only source of credit supply.  In a monetary economy, credit is mostly supplied by loans which are issued by financial institutions that intermediate between savers and borrowers.  Savings is not necessarily required for a bank to supply credit as loans can be created out of thin air via the banking system's role in money creation. Even without money creation by the banking system, savings as defined by national accounts, is not necessary for credit to be supplied by savers.  For example, an economy with 100% of output consumed, with no investment, and therefore no savings as measured by national accounts, would have credit markets as there would be savers and borrows, just no net saving for the economy as a whole.

A thought provoking paper from the Bank of International Settlement (here), by Claudio Borio and Piti Disyatat, entitled, Global imbalances and the financial crisis: Link or no link?,  emphasizes the importance of gross financial flows as well as monetary factors in the determination of interest rate. Specifically, they state:

The interest rate that prevails in the market at any given point in time is fundamentally a monetary phenomenon. It reflects the interplay between the policy rate set by central banks, market expectations about future policy rates and risk premia, as affected by the relative supply of financial assets and the risk perceptions and preferences of economic agents. It is thus closely related to the markets where financing, borrowing and lending take place. By contrast, the natural interest rate is an unobservable variable commonly assumed to reflect only real factors, including the balance between ex ante saving and ex ante investment, and to deliver equilibrium in the goods market. Saving and investment affect the market interest rate only indirectly, through the interplay between central bank policies and economic agents’ portfolio choices.

The paper corroborates many of the points made above and recommends a more systematic inclusion of monetary and financial factors in the current macroeconomic paradigm. I agree; and this needs to happen before we can understand the secular decline in interest rates and begin to answer where interest rates are headed.
Posted by Bernhard Eichenlaub at 10:38 No comments:

Canadian households continue to borrow from the rest of the economy

There is considerable coverage in the press about the level of debt being held by Canadian households, which continues to grow in both absolute terms and relative to income. There is more to this story. A key concept to understand is that someone’s debt is someone else’s asset, and therefore savings. For example, most mortgage debt in Canada is financed by bank deposits, which are someone else’s savings.  Therefore, total debts must equal total loan assets, resulting in no net debt.  More generally, net financial assets (for a closed economy or the world as a whole) must equal zero. This is an accounting truism. Financial assets can include both debt or equity.


The graph below shows financial flows in Canada since 1991 as a percentage of GDP.  What is striking is Canada’s deep fiscal deficits in the early to mid 1990s. These deficits were financed by surpluses in the corporate, household and external sectors.  However, by 1997, after years of fiscal austerity, government deficits became fiscal surpluses.  These fiscal surpluses financed the household sector which moved into deficit territory the same year.  Fast forward to the 2009 recession and government surpluses disappeared, with governments and households running deficits financed by corporate savings as well as the external sector (mostly via trade deficits). 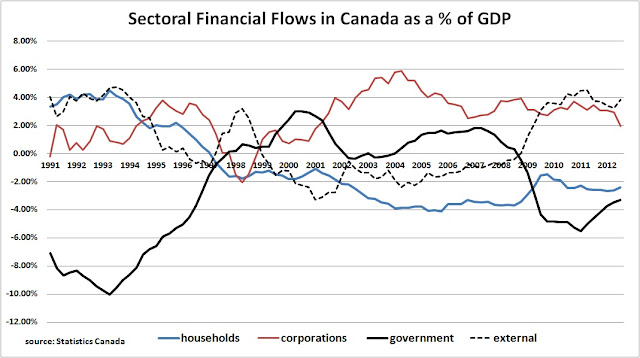 The corporate sector experienced financial flow surpluses for most of the period examined.  Normally in a capitalist economy households save and corporations invest household savings in non-financial assets, such as in non-residential structures, machinery or equipment. It is not clear why the corporate sector has been able to maintain a surplus position. Perhaps, because corporations retain their profits and reinvest them instead of paying out dividends, with household benefiting via capital gains not captured in financial flows.

Canada and US monetary policy - a Market Monetarist perspective

Market Monetarists maintain monetary policy should target nominal spending growth, not inflation.  They argue that had the Federal Reserve kept nominal spending at its pre-recession trend, the drop in real output would have been much less severe during the Great Recession.

Given the Market Monetarist perspective, what can we stay about the relative monetary stance between Canada and the United Stated?  Using data from the Bureau of Economic Analysis and Statistics Canada, the chart below compares NGDP from 2000 to the end of 2011 for both Canada and the US.  From 2000 to the end of 2006, NGDP growth was similar, averaging 5% annually, which is shown as the trend line.


NGDP both in Canada and the United States bottomed in Q2-2009. How has NGDP growth and the relative monetary policy stance compared since?

From the graph below, NGDP growth has been much stronger in Canada since Q2-2009, growing at 6.1% annually.  This is above the 2000-2006 trend rate, implying a relatively easy monetary policy stance.  At this growth rate, Canada would regain its pre-recession trend level in 2018.  However, if the objective is to keep nominal spending at 5%, the current monetary stance may be too easy. For the United Stated, NGDP growth continues to be below trend since the bottom of the recession, implying monetary policy is too tight.

If the current trends in NGDP continue, implying a tighter monetary policy in the United States, the implications for Canada would be a higher relative inflation rate, and as well, a depreciating Canada dollar.

Posted by Bernhard Eichenlaub at 18:46 No comments:

This blog is mostly about finance and macroeconomics. I am using this blog to force myself to organize my thoughts, as well as get feedback from others. I will on occasion cover other topics that interest me such as innovation, urban planning, architecture, entrepreneurship and leadership.

Bernhard Eichenlaub
I live in Ottawa, Canada, with my wife, two children and our Shih Tzu dog. I can be contacted at beichenlaub@gmail.com